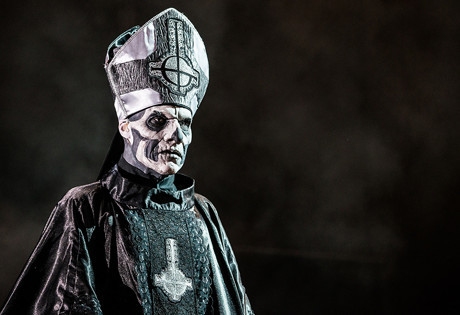 Start by filling out our no-obligation entertainment request form to check pricing and availability for Ghost or whoever else you may want.

Our Ghost agent will be happy to help you get Ghost's availability and booking fee, or the price and availability for any other A-List entertainer, band, comedian or celebrity you may want for your corporate event, private party, wedding, birthday party or public show.

The Swedish heavy metal band Ghost was established in the late 2000’s in the city of Linkoping. The band burst onto the music scene in 2010 with the single “Elizabeth,” quickly followed by a debut album, Opus Eponymous, which earned the band a nomination for Best Hard Rock album at the Grammis Awards in 2011. The group’s unique live performance presentation – with all members wearing identical costumes which conceal their identities and portray a “satanic” interpretation of the traditional church – quickly set Ghost apart from its contemporaries, and has since made the group an international heavy metal favorite.

Since their successful debut, Ghost has released the albums Infestissumam (2013) and most recently Meliora (2015), both of which rose to the number one spot on the Swedish charts and into the top forty on the US mainstream charts. The albums have spawned the singles “Secular Haze,” “Year Zero,’ “From the Pinnacle to the Pit,” “Majesty,” and most recently, “Cirice,” which rose into the top five on the rock charts in the United States and earned Ghost a Grammy Award for Best Metal Performance. Ghost has also been recognized with two additional Grammis Awards (both for Best Hard Rock/Metal Album), and multiple other award nominations since their inception.

Most recently, Ghost performed on The Late Show with Stephen Colbert. The performance, broadcast for the show’s Halloween-themed episode on October 30th, 2015, marked Ghost’s first live television appearance in the United States.

For more information on booking Ghost, please contact Booking Entertainment. One of our top booking agents will be happy to work on your behalf to get you the best possible price to book any big name entertainer for your upcoming public, private or corporate event worldwide.

Booking Entertainment works to get the best possible Ghost booking fee and Ghost price for our clients while also providing the celebrity or famous entertainer with the level of professionalism and industry norms that they expect from an event run by a professional booking agency and production management.

Booking Entertainment uses our agency / management relationships and over 25 years of production experience to help buyers of headline / top name entertainers and does not claim or represent itself as the exclusive Ghost agent, manager or management company for any of the artists on our site.

Booking Entertainment does not claim or represent itself as the exclusive booking agency, business manager, publicist, speakers bureau or management for Ghost or any artists or celebrities on this website.