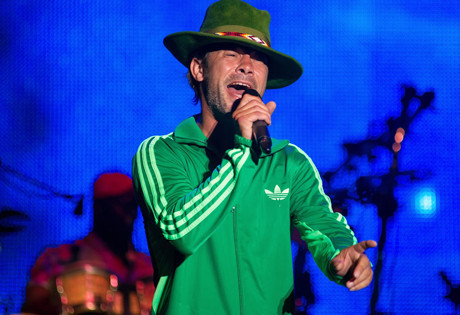 Start by filling out our no-obligation entertainment request form to check pricing and availability for Jamiroquai or whoever else you may want.

Our Jamiroquai agent will be happy to help you get Jamiroquai's availability and booking fee, or the price and availability for any other A-List entertainer, band, comedian or celebrity you may want for your corporate event, private party, wedding, birthday party or public show.

The British acid jazz and funk band Jamiroquai was established by Wallis Buchanan, Nick Van Gelder, Stuart Zender, Toby Smith, and Jay Kay in 1992. Although it wasn’t for a few years that the group truly burst onto the scene with the song “Virtual Insanity,” Jamiroquai began writing and recording immediately after the group’s formation, releasing their debut “When You Gonna Learn” in 1992.

“When You Gonna Learn” garnered significant attention from record labels, and Jamiroquai settled on an agreement with Sony Music Entertainment. With their major label’s support, Jamiroquai released the debut album Emergency on Planet Earth in 1993, to moderate success. The album spawned the singles “Too Young to Die,” “Blow Your Mind,” and “Emergency on Planet Earth,” although it was their follow-up album which began to earn Jamiroquai significant airplay in clubs.

The Return of the Space Cowboy arrived in 1994 and its first release, “Space Cowboy,” rose to the top of the charts. Since that time, Jamiroquai has released the additional albums: Travelling Without Moving (1996), Synkronized (1999), A Funk Odyssey (2001), Dynamite (2005), and Rock Dust Light Star (2010.) The albums spawned the additional chart-topping hits: “Light Years,” “Cosmic Girl,” “Alright,” “High Times,” “Canned Heat,” “Supersonic,” “Little L,” “You Give Me Something,” “Feels Just Like It Should,” “Runaway,” and “White Knuckle Ride.”

Since their inception, Jamiroquai has sold more than forty million albums worldwide. The group has been recognized with multiple MTV Video Music Awards and one Grammy Award. Most recently, Jamiroquai returned to the studio to begin writing and recording their next album, anticipated for release in 2015.

For more information on booking Jamiroquai, please contact Booking Entertainment. One of our top booking agents will be happy to work on your behalf to get you the best possible price to book any big name entertainer for your upcoming public, private or corporate event worldwide.

Booking Entertainment works to get the best possible Jamiroquai booking fee and Jamiroquai price for our clients while also providing the celebrity or famous entertainer with the level of professionalism and industry norms that they expect from an event run by a professional booking agency and production management.

Booking Entertainment uses our agency / management relationships and over 25 years of production experience to help buyers of headline / top name entertainers and does not claim or represent itself as the exclusive Jamiroquai agent, manager or management company for any of the artists on our site.

Booking Entertainment does not claim or represent itself as the exclusive booking agency, business manager, publicist, speakers bureau or management for Jamiroquai or any artists or celebrities on this website.