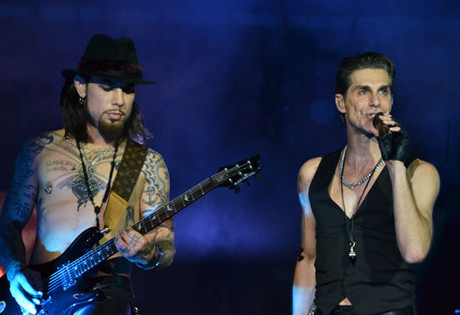 Start by filling out our no-obligation entertainment request form to check pricing and availability for Janes Addiction or whoever else you may want.

Our Janes Addiction agent will be happy to help you get Janes Addiction's availability and booking fee, or the price and availability for any other A-List entertainer, band, comedian or celebrity you may want for your corporate event, private party, wedding, birthday party or public show.

The American rock band known as Jane’s Addiction was established in Los Angeles in the mid 1980’s, by founding member Perry Farrell. Farrell had disbanded the floundering group Psi-com and was looking for a new project when he was introduced to Eric Avery. The two musicians found common influences such as the Velvet Underground, and they decided to establish a new band together.

With the addition of Stephen Perkins on drums and Dave Navarro on guitar, Jane’s Addiction began performing around the Los Angeles area, becoming a huge hit on the club scene. Eventually, Warner Bros. Records offered the group a deal, and the band recorded their debut album, Jane’s Addiction, during one of their live performances at the Roxy Theater.

But it was Jane’s Addiction’s second album, Nothing Shocking, that became the band’s big breakthrough. Despite lack of airplay on MTV, due to objectionable imagery in the video for “Mountain Song,” Jane’s Addiction established a strong following, and Nothing Shocking spawned the number one alternative hits “Stop” and “Been Caught Stealing.” The singles “Jane Says” and “Ocean Size” also fared well. The band followed up their debut with the album Ritual de lo habitual in 1990, but by 1991 Jane’s Addiction was plagued with drug addiction issues that eventually ripped the band members apart. Despite a reunion which led to the album Strays in 2003, Jane’s Addiction disbanded again while its members went on to other projects.

In 2008, Jane’s Addiction reunited to perform at the NME Awards, which led to a number of other performances and a short tour in 2009. The band members decided to reunite once again, producing the album The Great Escape Artist in 2011. The album spawned the alternative hits “Irresistible Force” and “Underground,” and since that time Jane’s Addiction has continued to perform together with the current lineup of Farrell, Navarro, Perkins, and Chris Chaney on bass.

Jane’s Addiction was recently nominated for induction into the Rock and Roll Hall of Fame. The band’s most recent appearances include a performance of the entire album Nothing’s Shocking, performed at the Brooklyn Bowl in Las Vegas in May of 2014.

For more information on booking Janes Addiction, please contact Booking Entertainment. One of our top booking agents will be happy to work on your behalf to get you the best possible price to book any big name entertainer for your upcoming public, private or corporate event worldwide.

Booking Entertainment works to get the best possible Janes Addiction booking fee and Janes Addiction price for our clients while also providing the celebrity or famous entertainer with the level of professionalism and industry norms that they expect from an event run by a professional booking agency and production management.

Booking Entertainment uses our agency / management relationships and over 25 years of production experience to help buyers of headline / top name entertainers and does not claim or represent itself as the exclusive Janes Addiction agent, manager or management company for any of the artists on our site.

Booking Entertainment does not claim or represent itself as the exclusive booking agency, business manager, publicist, speakers bureau or management for Janes Addiction or any artists or celebrities on this website.