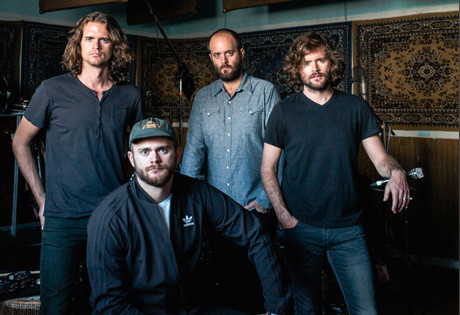 Start by filling out our no-obligation entertainment request form to check pricing and availability for Kongos or whoever else you may want.

Our Kongos agent will be happy to help you get Kongos's availability and booking fee, or the price and availability for any other A-List entertainer, band, comedian or celebrity you may want for your corporate event, private party, wedding, birthday party or public show.

The South African alternative rock/kwaito band known as Kongos was established in the late 2000’s, founded by brothers Dylan, Daniel, Jesse, and Johnny Kongos. The siblings spent their early formative years splitting their time between South Africa and London, but moved to Arizona in 1996. All four boys, who are the sons of noted songwriter John Kongos, attended Arizona State University, and the group released their debut album, Kongos, in 2007.

Kongos was a moderate success, but it was the recent release of Kongos’s sophomore effort, Lunatic, which put the band on the map in 2012. On the strength of the singles “I’m Only Joking” and “Come with Me Now,” the album began to create serious buzz and bring significant exposure and airplay to Kongos here in the United States. The song “Come with Me Now” was featured in the film The Expendables 3 and rose into the number one spot on the United States alternative charts, also peaking in the top forty on the mainstream charts and rock charts. The success of the self-released album garnered the attention of Epic Records, which signed Kongos to the label in 2014 and re-released the album lunatic under the label.

Other notable singles from Lunatic include “I Want to Know,” “Escape,” and “Sex on the Radio.” Kongos is currently a band on the rise and definitely one to watch. The group is expected to return to the studio to begin work on their next studio album this coming year.

For more information on booking Kongos, please contact Booking Entertainment. One of our top booking agents will be happy to work on your behalf to get you the best possible price to book any big name entertainer for your upcoming public, private or corporate event worldwide.

Booking Entertainment works to get the best possible Kongos booking fee and Kongos price for our clients while also providing the celebrity or famous entertainer with the level of professionalism and industry norms that they expect from an event run by a professional booking agency and production management.

Booking Entertainment uses our agency / management relationships and over 25 years of production experience to help buyers of headline / top name entertainers and does not claim or represent itself as the exclusive Kongos agent, manager or management company for any of the artists on our site.

Booking Entertainment does not claim or represent itself as the exclusive booking agency, business manager, publicist, speakers bureau or management for Kongos or any artists or celebrities on this website.