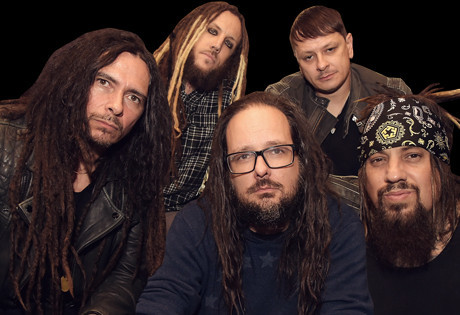 Start by filling out our no-obligation entertainment request form to check pricing and availability for Korn or whoever else you may want.

Wondering how to book Korn for your event? Let Booking Entertainment be Your entertainment booking agency for booking Korn for events worldwide.

Our Korn agent will be happy to help you get Korn's availability and booking fee, or the price and availability for any other A-List entertainer, band, comedian or celebrity you may want for your corporate event, private party, wedding, birthday party or public show.

The nu metal band Korn was born from the band previously known as L.A.P.D. and three of its original members – Reginald Arvizu, James Shaffer, and David Silvera. After L.A.P.D. disbanded, Silvera, Arvizu, and Shaffer brought Jonathan Davis and Brian Welch into the band and created Korn. The band started performing publicly in 1993, and began work on a demo album around the same time.

Korn was self-released in the following year and the band’s new metal sound piqued the interest of a number of music critics. That same year, Korn joined such notable artists as Ozzy Osbourne on tour, helping to further establish a fan base and bring them album into the Billboard 200 charts. The album eventually reached multi-platinum status and earned Korn a Grammy nomination for Best Metal Performance. The singles “Blind,” “Shoots and Ladders,” and “Need To,” were all equally successful, launching a career for Korn which has lasted well into the new millennium.

For their contributions to metal music, Korn has been recognized with multiple awards, including two Grammy Awards (with seven nominations.) Korn’s worldwide record sales have exceeded the fifty million mark, and they’ve placed eleven singles in the top ten of the Billboard 200. Korn’s most recent release is Paradigm Shift, which arrived in 2013.

For more information on booking Korn, please contact Booking Entertainment. One of our top booking agents will be happy to work on your behalf to get you the best possible price to book any big name entertainer for your upcoming public, private or corporate event worldwide.

Booking Entertainment works to get the best possible Korn booking fee and Korn price for our clients while also providing the celebrity or famous entertainer with the level of professionalism and industry norms that they expect from an event run by a professional booking agency and production management.

Booking Entertainment uses our agency / management relationships and over 25 years of production experience to help buyers of headline / top name entertainers and does not claim or represent itself as the exclusive Korn agent, manager or management company for any of the artists on our site.

Booking Entertainment does not claim or represent itself as the exclusive booking agency, business manager, publicist, speakers bureau or management for Korn or any artists or celebrities on this website.