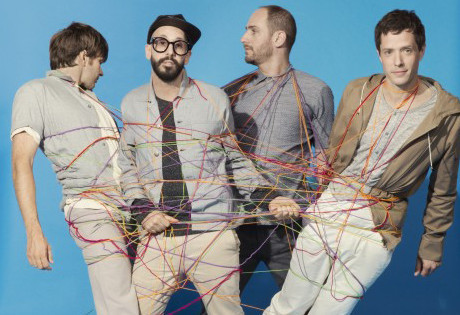 Start by filling out our no-obligation entertainment request form to check pricing and availability for OK Go or whoever else you may want.

Our OK Go agent will be happy to help you get OK Go's availability and booking fee, or the price and availability for any other A-List entertainer, band, comedian or celebrity you may want for your corporate event, private party, wedding, birthday party or public show.

The alternative rock band OK Go was originally formed in Chicago, when childhood friends Tim Nordwind and Damian Kulash met at an arts camp one summer. After years of sharing their musical knowledge and interests with each other, they formed OK Go in the late 1990’s and began performing around the local Chicago area before self-releasing the EPs Brown and Pink. After garnering the attention of a booking agent, they began opening for They Might Be Giants, leading to a number of offers for record deals.

OK Go settled on a deal with Capitol Records and released their self-titled debut in 2002. The album reached into the Billboard 200 and spawned the single “Get Over It,” which performed very well in Europe but still did not garner OK Go the attention they were hoping for in the United States. The band followed up with the album Oh No in 2004, and in part due to the strength of the single “A Million Ways,” the album performed better than its predecessor, leading to an extensive tour alongside such notable performers and bands as Snow Patrol and Death Cab for Cutie.

OK Go is just getting started. Their most recently release is the album Of the Blue Colour of the Sky (2010.) With the current lineup of Kulash, Nordwind, Dan Konopka, and Andy Ross, OK Go has plans for their next album and upcoming tours in the near future.

For more information on booking OK Go, please contact Booking Entertainment. One of our top booking agents will be happy to work on your behalf to get you the best possible price to book any big name entertainer for your upcoming public, private or corporate event worldwide.

Booking Entertainment works to get the best possible OK Go booking fee and OK Go price for our clients while also providing the celebrity or famous entertainer with the level of professionalism and industry norms that they expect from an event run by a professional booking agency and production management.

Booking Entertainment uses our agency / management relationships and over 25 years of production experience to help buyers of headline / top name entertainers and does not claim or represent itself as the exclusive OK Go agent, manager or management company for any of the artists on our site.

Booking Entertainment does not claim or represent itself as the exclusive booking agency, business manager, publicist, speakers bureau or management for OK Go or any artists or celebrities on this website.