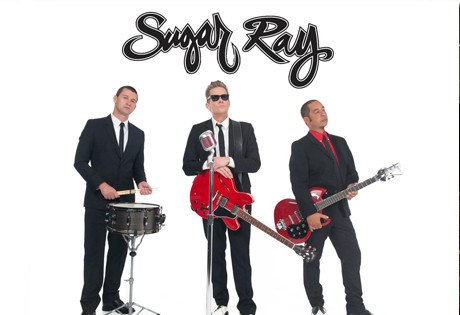 Start by filling out our no-obligation entertainment request form to check pricing and availability for Sugar Ray or whoever else you may want.

Our Sugar Ray agent will be happy to help you get Sugar Ray's availability and booking fee, or the price and availability for any other A-List entertainer, band, comedian or celebrity you may want for your corporate event, private party, wedding, birthday party or public show.

Sugar Ray stepped onto the music scene in 1997 with their hit single “Fly.” Initially labeled a potential one-hit wonder, Sugar Ray has defied the initial suspicion with which they were received, and has endured into the new millennium.

The band came together in 1992 in Los Angeles, when Mark McGrath joined Rodney Sheppard, Murphy Karges, and Stan Frazier. Within two years the band had a deal with Atlantic Records, and adopted the name Sugar Ray in tribute to Sugar Ray Leonard. The group’s debut album, Lemonade and Brownies, was released in 1995, to moderate success. Floored, their follow-up, was the band’s smash hit, going double-platinum on the strength of the single “Fly.” 14:59 followed, its title a snarky reference to the “15 minutes of fame” aphorism. The album went triple-platinum, and spawned the hits "Someday" and "Falls Apart.”

That year, in 1999, Sugar Ray played Woodstock and in the following year, Mark McGrath made his television debut playing a doctor on the hit drama ER. The group’s next album, Sugar Ray, was released in 2001, giving the band the hit “When It’s Over,” and bringing the album into the Top Ten status.  In the Pursuit of Leisure came in 2003, with the single “Mr. Bartender (It's So Easy.)” A Greatest Hits album came in 2005, and Music for Cougars followed in 2009.

Sugar Ray continues to perform occasionally with the current lineup of Mark McGrath, Rodney Sheppard, Kristian Attar, and Dean Butterworth. The band toured through 2014 and 2015, although in recent years the individual members have pursued side and solo projects as well. McGrath in particular, has appeared on a number of television shows, both reality and sitcom, including The Celebrity Apprentice, Celebrity Wife Swap, The Office, and Lady Dynamite. He also recently announced plans for his next solo EP.

For more information on booking Sugar Ray, please contact Booking Entertainment. One of our top booking agents will be happy to work on your behalf to get you the best possible price to book any big name entertainer for your upcoming public, private or corporate event worldwide.

Booking Entertainment works to get the best possible Sugar Ray booking fee and Sugar Ray price for our clients while also providing the celebrity or famous entertainer with the level of professionalism and industry norms that they expect from an event run by a professional booking agency and production management.

Booking Entertainment uses our agency / management relationships and over 25 years of production experience to help buyers of headline / top name entertainers and does not claim or represent itself as the exclusive Sugar Ray agent, manager or management company for any of the artists on our site.

Booking Entertainment does not claim or represent itself as the exclusive booking agency, business manager, publicist, speakers bureau or management for Sugar Ray or any artists or celebrities on this website.