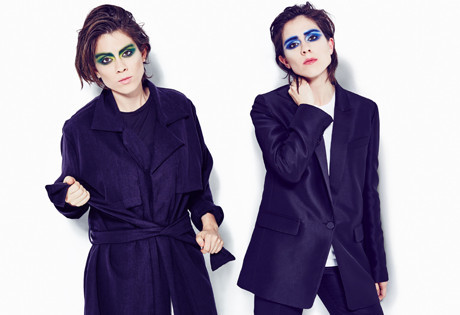 Start by filling out our no-obligation entertainment request form to check pricing and availability for Tegan and Sara or whoever else you may want.

Our Tegan and Sara agent will be happy to help you get Tegan and Sara's availability and booking fee, or the price and availability for any other A-List entertainer, band, comedian or celebrity you may want for your corporate event, private party, wedding, birthday party or public show.

Canadian siblings and pop performers Tegan and Sara came together to form a duo act in the late 1990’s. The twin sisters began playing instruments and writing music together when they were just teenagers, at first with a number of local high school bands. Tegan and Sara burst onto the music scene as their own act in 1999 with the release of the debut album Under Feet Like Ours, and shortly thereafter they signed with Vapor Records.

Another three albums followed - This Business of Art (2000), If It Was You (2002), and So Jealous (2004) – before Tegan and Sara experienced their big breakthrough with the album The Con (2007.) The Con rose into the top five on the Canadian mainstream charts but also charted in the top forty internationally, including in the United States. The albums Sainthood (2009) and Heartthrob (2013) followed, faring equally as well as The Con. Notable singles from the albums include: “Back in Your Head,” “Hell,” “Alligator,” “Northshore,” “I Was a Fool,” “Goodbye, Goodbye,” and their smash hit “Closer,” which was covered on the television show Glee.

Today, Tegan and Sara divide their time between Vancouver and Los Angeles, and over the last few years they have performed at some of the world’s biggest festivals, including: Lilith Fair, Coachella, Glastonburg, Winnipeg Folk Festival, SXSW, Lollapalooza, Austin City Limits, and Bonnaroo. Their music has appeared in films such as the Dallas Buyers Club (“Shudder to Think”) and The Lego Movie (“Everything Is Awesome.”) The duo has also performed on television shows such as the Ellen Degeneres Show, Late Show with David Letterman, the Tonight show with Jay Leno, and Jimmy Kimmel Live!

Tegan and Sara have so far been recognized with dozens of award nominations, with multiple wins including three Juno Awards - for Pop Album of the Year (for Heartthrob), Group of the Year, and Single of the Year (for “Closer.”) Both Tegan and Sara are publicly “out” as lesbians, and they are active advocates for LGBT rights in both the United States and Canada. Tegan and Sara most recently released their latest album, Love You to Death, in 2016. The album features the hit single, “Boyfriend.”

For more information on booking Tegan and Sara, please contact Booking Entertainment. One of our top booking agents will be happy to work on your behalf to get you the best possible price to book any big name entertainer for your upcoming public, private or corporate event worldwide.

Booking Entertainment works to get the best possible Tegan and Sara booking fee and Tegan and Sara price for our clients while also providing the celebrity or famous entertainer with the level of professionalism and industry norms that they expect from an event run by a professional booking agency and production management.

Booking Entertainment uses our agency / management relationships and over 25 years of production experience to help buyers of headline / top name entertainers and does not claim or represent itself as the exclusive Tegan and Sara agent, manager or management company for any of the artists on our site.

Booking Entertainment does not claim or represent itself as the exclusive booking agency, business manager, publicist, speakers bureau or management for Tegan and Sara or any artists or celebrities on this website.