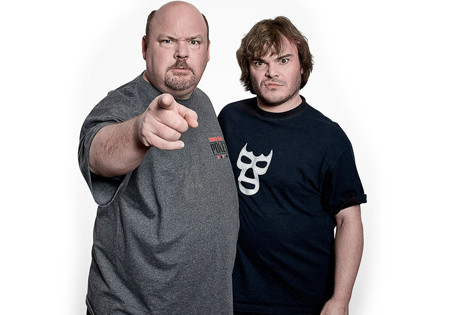 Start by filling out our no-obligation entertainment request form to check pricing and availability for Tenacious D or whoever else you may want.

Our Tenacious D agent will be happy to help you get Tenacious D's availability and booking fee, or the price and availability for any other A-List entertainer, band, comedian or celebrity you may want for your corporate event, private party, wedding, birthday party or public show.

The rock duo known as Tenacious D was formed by actor and guitarist Jack Black and vocalist Kyle Gass in Los Angeles in 1994. With a unique blend of parody and music, often referred to as “mock rock,” the duo’s live performances have become enormously popular long before their debut album, Tenacious D, was even released.

Black and Gass originally met up in Edinburg during the Fringe Festival in 1989. Jack Black didn’t know how to play guitar at the time, but his skills as a comedic actor led to Gass’s interest in helping him learn the instrument so that the two could begin performing together. By 1997, they’d garnered the attention of the HBO network, which began producing half-hour shows centered around the band. The series ran until 2000, after which time Tenacious D began opening for a number of high-profile bands, including Foo Fighters and Pearl Jam, and signed to Epic Records.

The debut album, Tenacious D, was released in 2001 and rose into the top forty on the charts. The album reached platinum status and featured the singles “Tribute,” “Wonderboy,” “POD,” and “Dio.” The duo have also released The Pick of Destiny (2006), the soundtrack for the film of the same name, which is a mockumentary following the story of the band’s formation. The film features a number of notable performers, including Ben stiller and Dave Grohl, although upon its release it fared rather poorly at the box office. Instead, Tenacious D’s members have found a following by appearing in a number of other films together, including: The Cable Guy (1996), Bongwater (1997), Saving Silverman (2001), Shallow Hal (2001), School of Rock (2003), and Year One (2009.) These appearances are in addition to Jack Black’s roles in dozens of other films as a an actor himself. In addition, Tenacious D has performed on Late Night with Conan O’Brien and Saturday Night Live.

Most recently, Tenacious D released the album Rize of the Fenix (2012.) The duo recently played at the Rock am Ring in Germany and the Download Festival in England in 2012, and at the Grona Lund theme park in Sweden in the summer of 2013.

For more information on booking Tenacious D, please contact Booking Entertainment. One of our top booking agents will be happy to work on your behalf to get you the best possible price to book any big name entertainer for your upcoming public, private or corporate event worldwide.

Booking Entertainment works to get the best possible Tenacious D booking fee and Tenacious D price for our clients while also providing the celebrity or famous entertainer with the level of professionalism and industry norms that they expect from an event run by a professional booking agency and production management.

Booking Entertainment uses our agency / management relationships and over 25 years of production experience to help buyers of headline / top name entertainers and does not claim or represent itself as the exclusive Tenacious D agent, manager or management company for any of the artists on our site.

Booking Entertainment does not claim or represent itself as the exclusive booking agency, business manager, publicist, speakers bureau or management for Tenacious D or any artists or celebrities on this website.