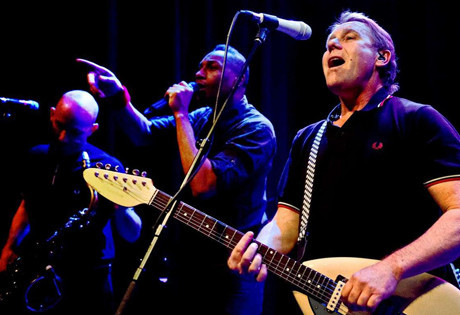 Start by filling out our no-obligation entertainment request form to check pricing and availability for The English Beat or whoever else you may want.

Our The English Beat agent will be happy to help you get The English Beat's availability and booking fee, or the price and availability for any other A-List entertainer, band, comedian or celebrity you may want for your corporate event, private party, wedding, birthday party or public show.

The band known as The English Beat (or The Beat, or The British Beat) was established in Birmingham, England in the late 1970’s. Founded by members Lionel Augustus Martin, Everett Morton, David Steele, Andy Cox, Ranking Roger, and Dave Wakeling, The English Beat arrived on the music scene in 1980 with the release of the debut album, I Just Can’t Stop It.

The album rose to the top of the charts in the UK and also charted well in New Zealand and Norway. It featured the singles “Tears of a Clown,” “Mirror in the Bathroom,” and “Too Nice to talk To,” and set the stage for The Beat’s follow-up album, Wha’ppen? The album fared even better for The English Beat, rising to silver status in the UK, but it still failed to give the band the big breakthrough in America they were hoping for. An extensive tour accompanied the release of the album, bringing The English Beat to the United States, first performing in support of Talking Heads and in support of The Pretenders.

Although it would be another decade before The English Beat would fully revive, it did so as The English Beat starring Dave Wakeling in 2014, with the lineup of Wakeling, King Schascha, Jared Palazzolo, Brian Klemm, Nucci Cantrell, Matt Morrish, Kevin Lum, and Jeffrey Govan. The English Beat released a long awaited fourth studio album, Here We Go Love, in 2015, and is currently touring and performing regularly.

For more information on booking The English Beat, please contact Booking Entertainment. One of our top booking agents will be happy to work on your behalf to get you the best possible price to book any big name entertainer for your upcoming public, private or corporate event worldwide.

Booking Entertainment works to get the best possible The English Beat booking fee and The English Beat price for our clients while also providing the celebrity or famous entertainer with the level of professionalism and industry norms that they expect from an event run by a professional booking agency and production management.

Booking Entertainment uses our agency / management relationships and over 25 years of production experience to help buyers of headline / top name entertainers and does not claim or represent itself as the exclusive The English Beat agent, manager or management company for any of the artists on our site.

Booking Entertainment does not claim or represent itself as the exclusive booking agency, business manager, publicist, speakers bureau or management for The English Beat or any artists or celebrities on this website.