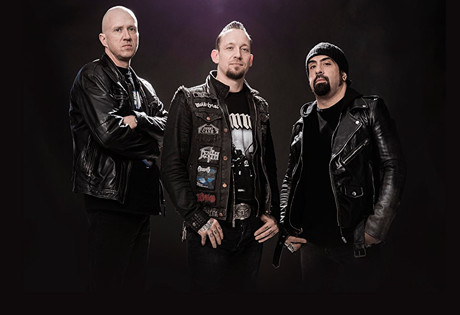 Start by filling out our no-obligation entertainment request form to check pricing and availability for Volbeat or whoever else you may want.

Our Volbeat agent will be happy to help you get Volbeat's availability and booking fee, or the price and availability for any other A-List entertainer, band, comedian or celebrity you may want for your corporate event, private party, wedding, birthday party or public show.

The Danish rock band Volbeat was established in Copenhagen in 2001 by founding member Michael Poulsen. Originally teaming up with musicians Jon Larsen, Anders Kjolholm, and Franz Gottschalk, Volbeat entered the studio in 2004 and released their debut album, The Strength/The Sound/The Songs, in 2005. The album was a huge hit in Denmark and paved with way for strong success in Germany.

Volbeat followed up with the albums: Rock the Rebel/Metal the Devil (2007), Guitar Gangsters & Cadillac Blood (2008), and Beyond Hell/Above Heaven (2010.) The albums brought Volbeat to the attention of listeners in the United States, and worldwide acclaim followed. Multiple singles from the band have charted internationally, but in the United States Volbeat has enjoyed the top ten metal hits “Fallen,” “A Warrior’s Call,” and “Dead but Rising,” and the number one metal/rock hits: “Heaven nor Hell,” “Still Counting,” “The Hangman’s Body Count,” and “Lola Montez.”

In recent years, Volbeat has toured extensively, often performing alongside such notable metal bands as Slayer, Anthrax, Megadeth, and Metallica. A highly successful North American tour was completed in the summer of 2012, alongside up and coming artists HellYeah and Iced Earth.  The band has also been recognized with a number of notable award nominations, including a Grammy for Best Metal Performance.

For more information on booking Volbeat, please contact Booking Entertainment. One of our top booking agents will be happy to work on your behalf to get you the best possible price to book any big name entertainer for your upcoming public, private or corporate event worldwide.

Booking Entertainment works to get the best possible Volbeat booking fee and Volbeat price for our clients while also providing the celebrity or famous entertainer with the level of professionalism and industry norms that they expect from an event run by a professional booking agency and production management.

Booking Entertainment uses our agency / management relationships and over 25 years of production experience to help buyers of headline / top name entertainers and does not claim or represent itself as the exclusive Volbeat agent, manager or management company for any of the artists on our site.

Booking Entertainment does not claim or represent itself as the exclusive booking agency, business manager, publicist, speakers bureau or management for Volbeat or any artists or celebrities on this website.