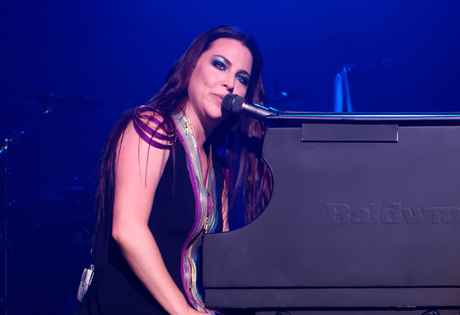 Start by filling out our no-obligation entertainment request form to check pricing and availability for Amy Lee or whoever else you may want.

Our Amy Lee agent will be happy to help you get Amy Lee's availability and booking fee, or the price and availability for any other A-List entertainer, band, comedian or celebrity you may want for your corporate event, private party, wedding, birthday party or public show.

Amy Lee is an American performer and vocalist born in 1981. The California native was raised in Arkansas and began taking lessons for piano and singing while in her teenage years. Lee would form a band with friend Ben Moody, and would eventually drop out of college and abandon her musical theory degree to focus on the project. The band would eventually become know as the critically acclaimed Evanescence.

Amy Lee would release her first project with Evanescence in 1998 and the group struck lightning ever since their debut single released in 2003. The band became one of the most popular names in the metal genre, let alone all of rock, throughout the 2000s. With Lee being the lead vocalist, she received countless praise and became one of the biggest female figures in rock music at the time. She began a solo career not long after, and has endured a long-standing, successful career.

Amy Lee is set to embark on an Evanescence European tour in the winter of 2022 and has put out several features of her own solo work in recent times, including a cover of "Love Hurts" with singer Dave Stewart.

For more information on booking Amy Lee, please contact Booking Entertainment. One of our top booking agents will be happy to work on your behalf to get you the best possible price to book any big name entertainer for your upcoming public, private or corporate event worldwide.

Booking Entertainment works to get the best possible Amy Lee booking fee and Amy Lee price for our clients while also providing the celebrity or famous entertainer with the level of professionalism and industry norms that they expect from an event run by a professional booking agency and production management.

Booking Entertainment uses our agency / management relationships and over 25 years of production experience to help buyers of headline / top name entertainers and does not claim or represent itself as the exclusive Amy Lee agent, manager or management company for any of the artists on our site.

Booking Entertainment does not claim or represent itself as the exclusive booking agency, business manager, publicist, speakers bureau or management for Amy Lee or any artists or celebrities on this website.