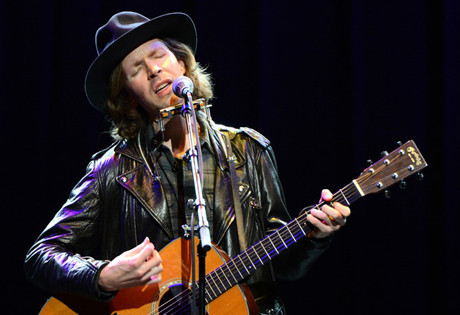 Start by filling out our no-obligation entertainment request form to check pricing and availability for Beck or whoever else you may want.

Wondering how to book Beck for your event? Let Booking Entertainment be Your entertainment booking agency for booking Beck for events worldwide.

Our Beck agent will be happy to help you get Beck's availability and booking fee, or the price and availability for any other A-List entertainer, band, comedian or celebrity you may want for your corporate event, private party, wedding, birthday party or public show.

Beck Hansen was born in 1970 in Los Angeles, California. Beck is the son of Bibbe Hansen and David Campbell, a musician who influenced Beck’s growing talents and interests.  After leaving high school, Beck moved to Washington state and began performing around Seattle at open-mic opportunities. After returning to Los Angeles, he continued to perform or join other musicians in performances whenever possible, until in 1993, when Beck released his debut, Golden Feelings, initially available only on cassette tape.

Shortly thereafter, Beck signed to Bong Load Custom Records and released his smash hit single, “Loser.” The song was such an enormous success that it created a sensation among the major record labels, and Beck embraced the opportunity to carefully select the label for his now burgeoning career. Beck chose Geffen Records, based on an agreement for creative freedom. The album Stereopathetic Soulmanure arrived in 1994 and featured the singles “Rowboat,” “Satan Gave Me a Taco,” and “Thunderpeel.” Mellow Gold came next in 1994, followed by a series of successful albums for the next two decades: One Foot in the Grave (1994), Odelay (1996), Mutations (1998), Midnight Vultures (1999), Sea Change (2002), Guero (2005), The Information (2006), Modern Guilt (2008), and Song Reader (2012.)

The albums featured the hit alternative singles: “Beercan,” “Where It’s At,” “Devils Haircut,” “The New Pollution,” “Jack-Ass,” “Deadweight,” “Tropicalia,” “Sexx Laws,” “Mixed Bizness,” “Lost Cause,” “E-Pro,” “Girl,” “Nausea,” “Think I’m in Love,” “Timebomb,” and “Gamma Ray.” Beck’s music has been hailed as innovative, and the album Odelay was recognized in 1996 as Rolling Stone’s pick for Album of the Year and ranks on the publication’s top 500 Greatest Albums of All Time.

In most recent years, Beck has continued to produce more innovative music, often collaborating with other notable artists, including Charlotte Gainesbourg, Jamie Lidell, Seu Jorge, Stephen Malkmus, and Philip Glass, most often in the role of producer. Beck also contributed music to the television series True Blood, the Twilight Saga films, and the soundtrack to the film Scott Pilgrim vs. the World. In addition, Beck is a talented artist and poet; his work was even showcased in a traveling exhibit in 1998. Currently, Beck is back in the studio working on his next album, set to release in the coming years.

For more information on booking Beck, please contact Booking Entertainment. One of our top booking agents will be happy to work on your behalf to get you the best possible price to book any big name entertainer for your upcoming public, private or corporate event worldwide.

Booking Entertainment works to get the best possible Beck booking fee and Beck price for our clients while also providing the celebrity or famous entertainer with the level of professionalism and industry norms that they expect from an event run by a professional booking agency and production management.

Booking Entertainment uses our agency / management relationships and over 25 years of production experience to help buyers of headline / top name entertainers and does not claim or represent itself as the exclusive Beck agent, manager or management company for any of the artists on our site.

Booking Entertainment does not claim or represent itself as the exclusive booking agency, business manager, publicist, speakers bureau or management for Beck or any artists or celebrities on this website.