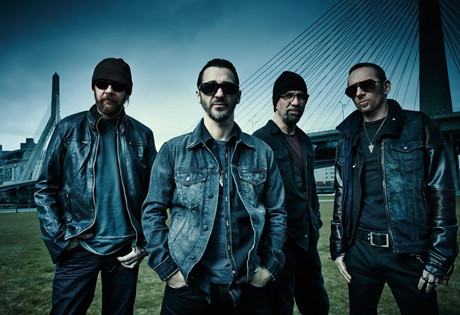 Start by filling out our no-obligation entertainment request form to check pricing and availability for Godsmack or whoever else you may want.

Our Godsmack agent will be happy to help you get Godsmack's availability and booking fee, or the price and availability for any other A-List entertainer, band, comedian or celebrity you may want for your corporate event, private party, wedding, birthday party or public show.

The American rock band Godsmack was formed in the mid 1990’s in Massachusetts. Founding member Sully Erna had already spent more than two decades as a drummer in the music industry, playing for a variety of bands. Erna teamed up with Robbie Merrilll, Tommy Stewart, and Lee Richards and developed Godsmack in 1995, and the band began performing around Boston in local bars and clubs. Joe D’Arco and Tony Rombola joined the band one year later, and Godsmack recorded and self-released its debut CD, All Wound Up.

All Wound Up received considerable local airplay in the Boston area and caught the attention of Universal/Republic Records. The label signed Godsmack in 1998, and after a few changes to the lineup, the re-released their debut album. This time, the album rose to multi-platinum status and Godsmack joined the ranks of America’s most successful alternative metal bands. So far, four additional albums from Godsmack have followed: Awake (2000), Faceless (2003), IV (2006), and the Oracle (2010), all four of which have reached number one status. Godsmack’s body of work so far has given audiences the top ten alternative rock singles: “Whatever,” “Keep Away,” “Voodoo,” “ Bad Religion,” “Awake,” “Greed,” “Serenity,” “Re-Align,” “Running Blind,” “Shine Down,” “The Enemy,” “Love-Hate-Sex-Pain,” “I Stand Alone,” “Straight Out of Line,” “Speak,” “Whiskey Hangover,” and “Cryin’ Like a Bitch.”

Godsmack continues to record and perform, with the current lineup of Erna, Merrill, Rombola, and Shannon Larkin. The band is a frequent participant on the Ozzfest tour and many other festivals. So far Godsmack has sold more than twenty million records and is among the most successful American rock bands of this era.

For more information on booking Godsmack, please contact Booking Entertainment. One of our top booking agents will be happy to work on your behalf to get you the best possible price to book any big name entertainer for your upcoming public, private or corporate event worldwide.

Booking Entertainment works to get the best possible Godsmack booking fee and Godsmack price for our clients while also providing the celebrity or famous entertainer with the level of professionalism and industry norms that they expect from an event run by a professional booking agency and production management.

Booking Entertainment uses our agency / management relationships and over 25 years of production experience to help buyers of headline / top name entertainers and does not claim or represent itself as the exclusive Godsmack agent, manager or management company for any of the artists on our site.

Booking Entertainment does not claim or represent itself as the exclusive booking agency, business manager, publicist, speakers bureau or management for Godsmack or any artists or celebrities on this website.