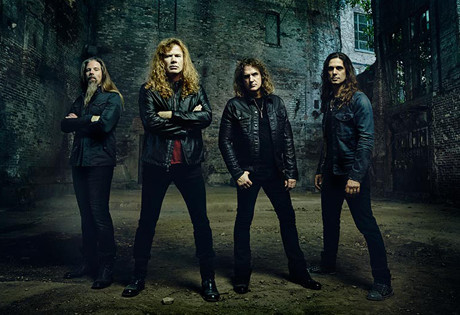 Start by filling out our no-obligation entertainment request form to check pricing and availability for Megadeth or whoever else you may want.

Our Megadeth agent will be happy to help you get Megadeth's availability and booking fee, or the price and availability for any other A-List entertainer, band, comedian or celebrity you may want for your corporate event, private party, wedding, birthday party or public show.

The iconic American thrash metal band, Megadeth, was born in Los Angeles in the early 1980’s. Alongside Antrhax, Slayer, and Metallica, Megadeth is considered one of the most important metal bands in American music history, often credited as one of the bands to fully establish the thrash metal genre. Megadeth was the brainchild of musician Dave Mustaine, who founded the group after leaving Metallica. The band recorded a demo in 1984 and signed with Combat Records later that year, paving the way for their debut album.

Killing is My Business… and Business Is Good! was released in 1985 and was met with critical acclaim. The album didn’t spawn any chart-topping singles, but Megadeth followed up with Peace Sells… but Who’s Buying? (1986), So Far, So Good… So What! (1988), and Rust in Peace (1990), during which time they steadily increased their fan base and continued to tour in support of their music. But it was the album Countdown to Extinction in 1992 which brought Megadeth onto the Billboard chart with the song “Symphony of Destruction.” Since then, Megadeth has released a number of albums which have been successful in the thrash metal market and have gone on to become favorites for its audiences: Youthanasia (1994), Cryptic Writings (1997), Risk (1999), The World Needs A Hero (2001), The System Has Failed (2004), United Abominations (2007), Endgame (2009), and Thirteen (2011.)

Megadeth continues to perform and record with the current lineup of Mustaine, Dave Ellefson, Shawn Drover, and Chris Broderick. The band’s most recent release is Super Collider, which arrived in 2013.

For more information on booking Megadeth, please contact Booking Entertainment. One of our top booking agents will be happy to work on your behalf to get you the best possible price to book any big name entertainer for your upcoming public, private or corporate event worldwide.

Booking Entertainment works to get the best possible Megadeth booking fee and Megadeth price for our clients while also providing the celebrity or famous entertainer with the level of professionalism and industry norms that they expect from an event run by a professional booking agency and production management.

Booking Entertainment uses our agency / management relationships and over 25 years of production experience to help buyers of headline / top name entertainers and does not claim or represent itself as the exclusive Megadeth agent, manager or management company for any of the artists on our site.

Booking Entertainment does not claim or represent itself as the exclusive booking agency, business manager, publicist, speakers bureau or management for Megadeth or any artists or celebrities on this website.