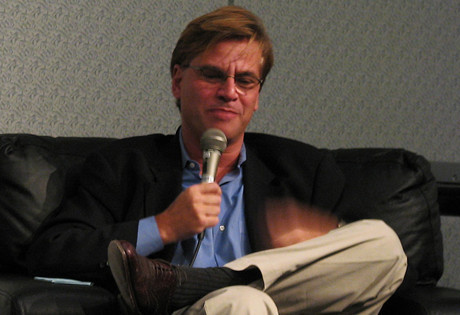 Start by filling out our no-obligation entertainment request form to check pricing and availability for Aaron Sorkin or whoever else you may want.

Our Aaron Sorkin agent will be happy to help you get Aaron Sorkin's availability and booking fee, or the price and availability for any other A-List entertainer, band, comedian or celebrity you may want for your corporate event, private party, wedding, birthday party or public show.

Screenwriter and producer Aaron Sorkin was born in 1961 in New York. Sorkin rose to fame in the 1990’s for his unique style of screenwriting, with lengthy monologues and fast moving dialogue, as appeared on his hit television series the West Wing. But long before that, Sorkin grew up in the Scarsdale suburbs, acting in his high school drama club and attending live theater as often as possible. Aaron Sorkin graduated from Syracuse University with his B.A. in Fine Arts in the early 1980’s, and immediately moved to New York City to pursue a career as an actor.

Aaron Sorkin spent a few years touring with various acting groups and working in  a number of odd jobs until he began writing plays. Sorkin’s first endeavor, the play Removing All Doubt, was staged for Syracuse drama students in 1984. Aaron’s follow-up, Hidden in This Picture, made its way to off-Broadway. The success of both eventually garnered Sorkin his first agent, just in time for Sorkin’s third play, A Few Good Men, to go straight from play draft to film rights, culminating in the smash-hit film A Few Good Men, starring Tom Cruise and Demi Moore.

Since that time, Aaron Sorkin has been one of the era’s most successful and highly respected screenwriters and television producers/writers. Notable films from Sorkin include: The American President (1995), Charlie Wilson’s War (2007), The Social Network (2010), and Moneyball (2011.) Television series from Sorkin include his smash-hit The West Wing (1999-2006) and more recently, The Newsroom (2012-2014.) Sorkin’s trademark style is the unique dialogue delivery, but his manner of writing is frequently complemented by Thomas Schlamme, his long-time collaborator who utilizes unique camera moves to follow characters from room to room, space to space, in a single take, creating a unique sense of urgency.

Aaron Sorkin is still at the height of his career, and he continues to write and produce for both television and film. His most recent offering is the film Steve Jobs, based on the book by Walter Isaacson. The film released in 2015.

For more information on booking Aaron Sorkin, please contact Booking Entertainment. One of our top booking agents will be happy to work on your behalf to get you the best possible price to book any big name entertainer for your upcoming public, private or corporate event worldwide.

Booking Entertainment works to get the best possible Aaron Sorkin booking fee and Aaron Sorkin price for our clients while also providing the celebrity or famous entertainer with the level of professionalism and industry norms that they expect from an event run by a professional booking agency and production management.

Booking Entertainment uses our agency / management relationships and over 25 years of production experience to help buyers of headline / top name entertainers and does not claim or represent itself as the exclusive Aaron Sorkin agent, manager or management company for any of the artists on our site.

Booking Entertainment does not claim or represent itself as the exclusive booking agency, business manager, publicist, speakers bureau or management for Aaron Sorkin or any artists or celebrities on this website.