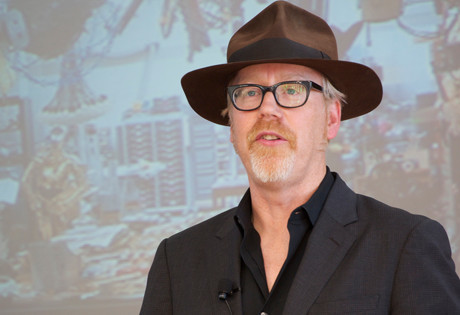 Start by filling out our no-obligation entertainment request form to check pricing and availability for Adam Savage or whoever else you may want.

Our Adam Savage agent will be happy to help you get Adam Savage's availability and booking fee, or the price and availability for any other A-List entertainer, band, comedian or celebrity you may want for your corporate event, private party, wedding, birthday party or public show.

American industrial designer and television personality Adam Savage was born Adam Whitney Savage in 1967 in New York City. Long before Savage rose to fame for his role in the hit television series MythBusters, he grew up in Sleepy Hollow, inspired by the creativity of his father, who was a filmmaker and animator who contributed work to a number of television shows and films. Adam started his acting career while still in elementary school, appearing on such programs as Sesame Street.

By the time he was in his late teens, Adam Savage’s love of acting had given way to his love of designing. Although still very much immersed in the television and theater of New York, Savage turned instead to graphic design, animation, and eventually special effects. In 2006, Adam began co-hosting MythBusters for the Discovery Channel. The role has made him a household name, although he also hosts the network’s show Unchained Reaction. In addition, Adam Savage has contributed special effects and designs to such notable films as the Matrix Reloaded and Star Wars Episode II: Attack of the Clones.

Today, Adam Savage can still be seen in his television hosting roles, and he also co-hosts a weekly podcast, Still Untitled: The Adam Savage Project. The popular podcast began in the summer of 2012 and continues to this day, with each episode featuring a conversation between Adam and his guests, as they explore a variety of topics related to film, science, and popular culture.

For more information on booking Adam Savage, please contact Booking Entertainment. One of our top booking agents will be happy to work on your behalf to get you the best possible price to book any big name entertainer for your upcoming public, private or corporate event worldwide.

Booking Entertainment works to get the best possible Adam Savage booking fee and Adam Savage price for our clients while also providing the celebrity or famous entertainer with the level of professionalism and industry norms that they expect from an event run by a professional booking agency and production management.

Booking Entertainment uses our agency / management relationships and over 25 years of production experience to help buyers of headline / top name entertainers and does not claim or represent itself as the exclusive Adam Savage agent, manager or management company for any of the artists on our site.

Booking Entertainment does not claim or represent itself as the exclusive booking agency, business manager, publicist, speakers bureau or management for Adam Savage or any artists or celebrities on this website.