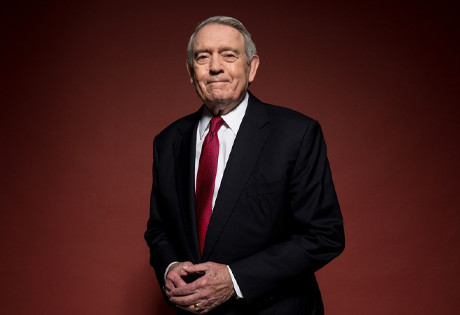 Start by filling out our no-obligation entertainment request form to check pricing and availability for Dan Rather or whoever else you may want.

Our Dan Rather agent will be happy to help you get Dan Rather's availability and booking fee, or the price and availability for any other A-List entertainer, band, comedian or celebrity you may want for your corporate event, private party, wedding, birthday party or public show.

American journalist Dan Rather was born in 1931 in Wharton County, Texas, into a working class family. After graduating from high school in Houston, Rather went on to study journalism at Sam Houston State University, serving as editor of the school newspaper. After graduating, Rather begin his career as a reporter for the Associated Press, based in Huntsville.

From the AP, Dan Rather wen ton to serve as a reporter for United Press, the Houston Chronicle, and various radio stations. After gaining additional experience with local television stations, Rather left Texas for New York, to see if he could break into the business in the big city. Although he landed a major network gig with CBS News, the station instead made him bureau chief of their Southwest division, sending Rather back to Texas.

But the assignment in Dallas ending up becoming the turning point for Dan Rather’s career, when he ended up inadvertently covering the assassination of then president John F. Kennedy. His skillful reporting during the mourning period that followed led to a position as the network’s White House correspondent. The rest, as they say, is history.

Today, Dan Rather boasts a career that spans four decades, the bulk of which consisted of his anchoring the CBS Evening News and 60 Minutes. Considered one of the “big three” news anchors in the nation (along with Tom Brokaw and Peter Jennings), Rather left the CBS network in 2006 to host his own Dan Rather Reports, with which he remained until 2013. His career features numerous award recognitions, including multiple Peabody Awards

Today, Dan Rather hosts and produces his own hour-long series for AXS TV; The Big Interview features Rather interviewing some of the biggest names in entertainment. Rather also frequently appears as a commentator on CNN, The Rachel Maddow Show, and other news programs. Most recently, Dan Rather launched his own production company. News and Guts Media now serves as producer of The Big Interview and will be producing other material in the years to come.

Hiring Dan Rather For Corporate Events, Private Parties And Public Concerts Is Easy With Booking Entertainment

For more information on booking Dan Rather, please contact Booking Entertainment. One of our top booking agents will be happy to work on your behalf to get you the best possible price to book any big name entertainer for your upcoming public, private or corporate event worldwide.

Booking Entertainment works to get the best possible Dan Rather booking fee and Dan Rather price for our clients while also providing the celebrity or famous entertainer with the level of professionalism and industry norms that they expect from an event run by a professional booking agency and production management.

Booking Entertainment uses our agency / management relationships and over 25 years of production experience to help buyers of headline / top name entertainers and does not claim or represent itself as the exclusive Dan Rather agent, manager or management company for any of the artists on our site.

Booking Entertainment does not claim or represent itself as the exclusive booking agency, business manager, publicist, speakers bureau or management for Dan Rather or any artists or celebrities on this website.