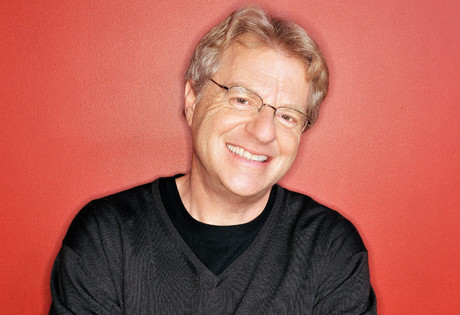 Start by filling out our no-obligation entertainment request form to check pricing and availability for Jerry Springer or whoever else you may want.

Our Jerry Springer agent will be happy to help you get Jerry Springer 's availability and booking fee, or the price and availability for any other A-List entertainer, band, comedian or celebrity you may want for your corporate event, private party, wedding, birthday party or public show.

The British- American television personality Jerry Springer was born in London, England, in 1944. Having lost much of his family to the concentration camps of World War II, Springer’s German-born parents fled their home country arriving first in England, and then shortly after Jerry was born, in the United States. The family settled in Queens, New York, and Jerry grew up with aspirations initially to work in politics.

After earning his B.A. in Political Science from Tulane University, Jerry Springer went on to earn his J.D. from Northwestern University. After serving as a political campaign advisor to Robert F. Kennedy, Springer ran for congress in 1970, losing the race but earning an impressive share of the votes. A year later, Jerry joined the Cincinnati city council, but within a few years he’d switched to a career in television news, which eventually led to the launching of his own talk show.

The Jerry Springer Show debuted in 1991, and began as a politically oriented talk show in the style of such successful programs as Donahue. Declining ratings led to a change in format, however, and so by 1994 the show had instead turned its attention toward tabloid sensationalism. Within four years, the Jerry Springer Show’s ratings were surpassing that of Oprah Winfrey’s in some markets, with viewers totally nearly seven million. Ten years later, the show is still going strong.

Jerry Springer has since grown to become a highly recognizable public figure. But in addition to his work on the the infamous talk show, Jerry Springer has also served as host for America’s Got Talent, competed on Dancing with the Stars, hosted a number of radio talk shows, and hosted both the Miss World and Miss Universe pageants. He continues to also host the GSN show Baggage, as he’s done since 2010, and he has even worked in development over in England on a show series concept similar to the American Jerry Spring Show.

For more information on booking Jerry Springer , please contact Booking Entertainment. One of our top booking agents will be happy to work on your behalf to get you the best possible price to book any big name entertainer for your upcoming public, private or corporate event worldwide.

Booking Entertainment works to get the best possible Jerry Springer booking fee and Jerry Springer price for our clients while also providing the celebrity or famous entertainer with the level of professionalism and industry norms that they expect from an event run by a professional booking agency and production management.

Booking Entertainment uses our agency / management relationships and over 25 years of production experience to help buyers of headline / top name entertainers and does not claim or represent itself as the exclusive Jerry Springer agent, manager or management company for any of the artists on our site.

Booking Entertainment does not claim or represent itself as the exclusive booking agency, business manager, publicist, speakers bureau or management for Jerry Springer or any artists or celebrities on this website.