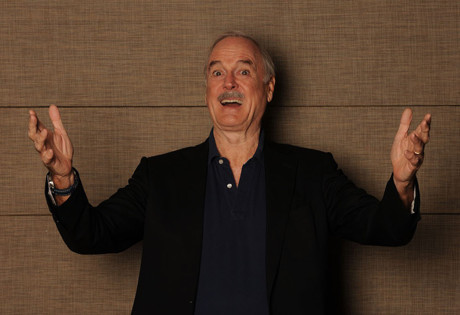 Start by filling out our no-obligation entertainment request form to check pricing and availability for John Cleese or whoever else you may want.

Our John Cleese agent will be happy to help you get John Cleese's availability and booking fee, or the price and availability for any other A-List entertainer, band, comedian or celebrity you may want for your corporate event, private party, wedding, birthday party or public show.

The English actor and comedian John Cleese was born in 1939 in Somerset, England. As a young student, John excelled both academically and on the athletic field, becoming a cricket player and boxer. Following his graduation, Cleese taught briefly before studying law at Downing College, Cambridge. While at Cambridge, John began spending a lot of time at the theatrical clubs and began to develop a love of theater and comedy.

Cleese’s earliest gigs were as a writer for the Cambridge Circus, which toured internationally after a hugely successful debut on the London West End stage. The traveling brought John to the United States, where he began performing in various off-Broadway plays. It is here that he met Terry Gilliam, but long before the two would reunited as Monty Python members, Cleese returned to England to join the cast of I’m Sorry, I’ll Read That Again, and then after that The Frost Report in 1965. The Frost Report would go on to become John Cleese’s major breakthrough as a talented sketch comedian.

In 1969, John Cleese became a member of Monty Python’s Flying Circus, a BBC Television series which would change the nature of sketch comedy for the entire era. Cleese’s notable characters become iconic, and set the stage for the films: Monty Python and the Holy Grail; Monty Python’s Life of Brian; and Monty Python’s the Meaning of Life. The films brought Cleese recognition at an international level, as they were hugely popular in the United States, but in the UK it was on the series Fawlty Towers that he became a most beloved comedian in his own country. The series ran only twelve episodes, but garnered the industry’s most prestigious awards.

In the 1980’s and 1990’s, John Cleese shifted his attention to the big screen, appearing in such films as a Fish Called Wanda. In the new millennium, Cleese has continued to act in a variety of films, including some of the Harry Potter blockbusters, but he also served for seven years a visiting professor for Cornell University and toured with his own live show, John Cleese – His Life, Times, and Current Medical Problems. He has also contributed to The Spectator as a writer, and launched another comedy tour in 2011. Most recently, Cleese embarked on his first Canadian tour, performing his show John Cleese: Last Time to See Me Before I Die in Ottowa, Halifax, Calgary, Toronto, and Vancouver.

For more information on booking John Cleese, please contact Booking Entertainment. One of our top booking agents will be happy to work on your behalf to get you the best possible price to book any big name entertainer for your upcoming public, private or corporate event worldwide.

Booking Entertainment works to get the best possible John Cleese booking fee and John Cleese price for our clients while also providing the celebrity or famous entertainer with the level of professionalism and industry norms that they expect from an event run by a professional booking agency and production management.

Booking Entertainment uses our agency / management relationships and over 25 years of production experience to help buyers of headline / top name entertainers and does not claim or represent itself as the exclusive John Cleese agent, manager or management company for any of the artists on our site.

Booking Entertainment does not claim or represent itself as the exclusive booking agency, business manager, publicist, speakers bureau or management for John Cleese or any artists or celebrities on this website.