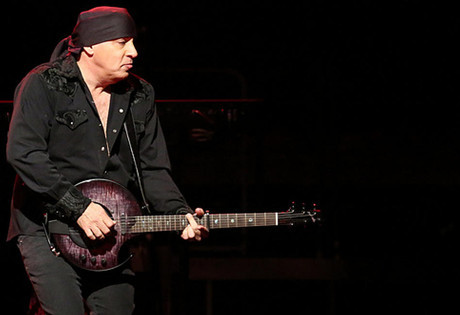 Start by filling out our no-obligation entertainment request form to check pricing and availability for Little Steven Van Zandt or whoever else you may want.

American music legend Steven Van Zandt was born in 1950 in Boston, Massachusetts. Van Zandt originally rose to fame first as a guitarist for Bruce Springsteen’s E Street Band, and then later for his pivotal role as Silvio on the hit HBO series The Sopranos. But long before, he grew up in an Italian American household in Middletown, New Jersey, learning to play guitar and starting his first band when he was a teenager.

After performing with a number of bands in the early 1970’s, Van Zandt began working with the E Street Band, both as a performer and writer. Van Zandt is credited for crafting some of Springsteen’s most recognizable guitar riffs, especially on the “Born to Run” album. Although Van Zandt continued to play with the E Street Band for most of the 1970’s and again in the 1990’s, and continues to do so today, he also became a well-respected producer and writer for a number of other Jersey-based bands, and is often credited with helping to craft what is known as the “Jersey Shore Sound” in music. Van Zandt’s own solo projects also range widely in genre, from hard rock to soul; he is best known for fronting his own band, Little Steven and the Disciples of Soul, with which he has released the albums: Men Without Women (1982), Voice of America (1984), Freedom – No Compromise (1987), Revolution (1989), and Born Again Savage (1999.)

Aside from his contributions to the world of music, Steven Van Zandt is best known for his role as Silvio Dante on HBO’s series The Sopranos, a role he began in 1999 and one which grew to become pivotal to the series’ success. Although Van Zandt stated at the conclusion of the show that he had no interest in continuing an acting career beyond the series, in 2011 he began production on the Netflix series Lilyhammer, which premiered in 2012 and ran for three seasons.

Steven Van Zandt continues to perform and produce. He hosts his own syndicated radio show, Little Steven’s Underground Garage, and serves as programming director multiple channels on the Sirius Satellite Radio network. He also launched his own record label in 2006; a number of underground bands including the Cocktail Slippers and the Charms have released their music through his Wicked Cool Records.

For more information on booking Little Steven Van Zandt, please contact Booking Entertainment. One of our top booking agents will be happy to work on your behalf to get you the best possible price to book any big name entertainer for your upcoming public, private or corporate event worldwide.

Booking Entertainment uses our agency / management relationships and over 25 years of production experience to help buyers of headline / top name entertainers and does not claim or represent itself as the exclusive Little Steven Van Zandt agent, manager or management company for any of the artists on our site.

Booking Entertainment does not claim or represent itself as the exclusive booking agency, business manager, publicist, speakers bureau or management for Little Steven Van Zandt or any artists or celebrities on this website.