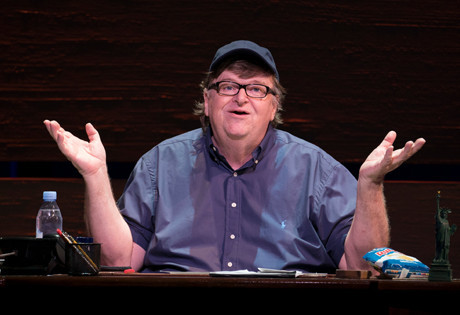 Start by filling out our no-obligation entertainment request form to check pricing and availability for Michael Moore or whoever else you may want.

Our Michael Moore agent will be happy to help you get Michael Moore's availability and booking fee, or the price and availability for any other A-List entertainer, band, comedian or celebrity you may want for your corporate event, private party, wedding, birthday party or public show.

The American filmmaker and political activist Michael Moore was born in 1954 in Michigan. As a child, young Michael watched many members of his family, including his father, work on assembly lines for major car manufacturers. The men in his family were champions for union rights, and his uncle was amount one of the founders of the local labor union for automobile workers. Their struggle for fair pay and equal rights left a permanent imprint on Moore, who would carry those messages throughout his life and career.

After graduating from high school, Moore briefly attended the University of Michigan, but left to begin his first career as a writer. Michael founded The Michigan Voice in the early 1980’s, and in 1986, he moved to California to serve as the editor for Mother Jones. The gig was short-lived, with Michael leaving the job after only a few months in a dispute over content. The incident turned out to be quite fortunate for Michael; it resulted in a wrongful termination suit which gave Moore the start-up money he needed for his first documentary film, Roger & Me.

Roger & Me, which depicted the struggles of the Flint, Michigan community after the closing of its General Motors factories, was a critical success, earning Moore his first Emmy and paving the way for a career which would give audiences some of their most significant documentary films of the era. Moore’s ability to infuse satire into his documentaries became his calling-card, and an effective way to convey disturbing information about everything from gun control to the American health care system. Michael’s next notable achievement would be Bowling for Columbine (2002), but before that he would also release Pets or Meat: The Return to Flint (1992), Canadian Bacon (1995), and the Big One (1997.)

Bowling for Columbine became one of his most successful and controversial documentaries, and an iconic one for the era. In exploring the root causes of the 1999 Columbine High School massacre, Moore gave America its first high-grossing mainstream documentary, and brought the film genre from fringe to forefront. Columbine earned Michael an Award from the Cannes Film Festival and the 2002 Academy Award for Documentary Feature.

For more information on booking Michael Moore, please contact Booking Entertainment. One of our top booking agents will be happy to work on your behalf to get you the best possible price to book any big name entertainer for your upcoming public, private or corporate event worldwide.

Booking Entertainment works to get the best possible Michael Moore booking fee and Michael Moore price for our clients while also providing the celebrity or famous entertainer with the level of professionalism and industry norms that they expect from an event run by a professional booking agency and production management.

Booking Entertainment uses our agency / management relationships and over 25 years of production experience to help buyers of headline / top name entertainers and does not claim or represent itself as the exclusive Michael Moore agent, manager or management company for any of the artists on our site.

Booking Entertainment does not claim or represent itself as the exclusive booking agency, business manager, publicist, speakers bureau or management for Michael Moore or any artists or celebrities on this website.