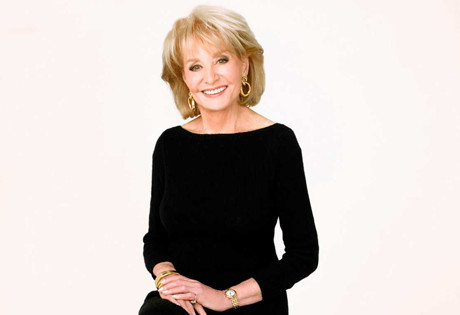 Start by filling out our no-obligation entertainment request form to check pricing and availability for Barbara Walters or whoever else you may want.

Our Barbara Walters agent will be happy to help you get Barbara Walters's availability and booking fee, or the price and availability for any other A-List entertainer, band, comedian or celebrity you may want for your corporate event, private party, wedding, birthday party or public show.

Legendary American broadcast journalist Barbara Walters was born in 1929 in New York. Barbara’s father was a businessman and entrepreneur who had several ups and downs in entertainment business investments, including casinos, and night clubs. Walters’s businesses brought young Barbara very close to the entertainment industry, and she recalls as a young girl being in “awe” of the many celebrities who she encountered through his establishments.

After a series of failed investments, Barbara and her family moved back and forth from Miami Beach to New York City, with Barbara ultimately graduating from Birch Wathen School in NYC in 1947. Following high school, Barbara graduated from Sarah Lawrence College in 1951 with a B.A. in English, and she returned to New York to begin work at a local NBC news affiliate, writing press releases and working in their publicity department. After a few years, Walters moved into producing, and then in 1955 she began working as a writer for the CBS Morning Show.

By 1962, Barbara was writing and producing various stories of interest to women for The Today Show on NBC. Her talent for interviewing and her warm on-camera personality became evident over the years, and so by the early 1970’s she was tapped for the role of co-host on the network. The gig became Walters’s foray into her legendary career as one of the world’s most recognizable and successful on-air personalities, a career which has lasted well into the new millennium.

Throughout the 1970’s, 1980’s, and 1990’s, Barbara Walters anchored for the ABC Evening News; the ABC newsmagazine 20/20; the The View (also for the ABC network.) Her television “specials,” in which she interviews various celebrity figures, have become legendary for their poignant revelations of some of the era’s most cherished and sometimes notorious public figures. She has been recognized with dozens of awards, including multiple Emmy Awards, Women in Film Awards, and NAACP Image Awards.

Barbara Walters’s most recent consistent role has been as host of the ABC program The View, which she joined in the mid 1990’s and hosted until she recently announced her retirement in 2015. Walters continues to appear in her special reports for 20/20, and occasionally on her own television specials.

For more information on booking Barbara Walters, please contact Booking Entertainment. One of our top booking agents will be happy to work on your behalf to get you the best possible price to book any big name entertainer for your upcoming public, private or corporate event worldwide.

Booking Entertainment works to get the best possible Barbara Walters booking fee and Barbara Walters price for our clients while also providing the celebrity or famous entertainer with the level of professionalism and industry norms that they expect from an event run by a professional booking agency and production management.

Booking Entertainment uses our agency / management relationships and over 25 years of production experience to help buyers of headline / top name entertainers and does not claim or represent itself as the exclusive Barbara Walters agent, manager or management company for any of the artists on our site.

Booking Entertainment does not claim or represent itself as the exclusive booking agency, business manager, publicist, speakers bureau or management for Barbara Walters or any artists or celebrities on this website.