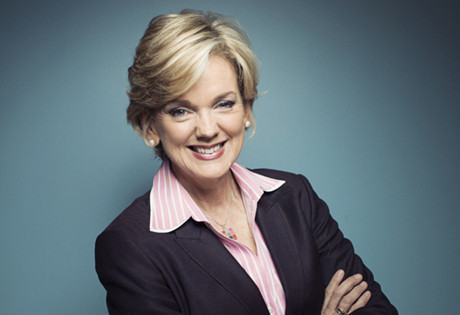 Start by filling out our no-obligation entertainment request form to check pricing and availability for Jennifer Granholm or whoever else you may want.

Our Jennifer Granholm agent will be happy to help you get Jennifer Granholm's availability and booking fee, or the price and availability for any other A-List entertainer, band, comedian or celebrity you may want for your corporate event, private party, wedding, birthday party or public show.

The American politician and political commentator Jennifer Granholm was born in 1959 in Vancouver, British Columbia. When she was four years old, Granholm and her family moved to California, where she spent her formative years. As a teenager and young woman, Jennifer competed in a number of beauty pageants, and she initially had aspirations to become an actress. However, after working for John B. Anderson’s campaign during his 1980 presidential run, Granholm’s plans for the future changed.

Jennifer Granholm enrolled at the University of California, Berkeley, to pursue a B.A. in Political Science. After graduating in 1984, she pursued her Juris Doctor at Harvard, graduating with honors in 1987. Granholm’s first foray into politics and law was clerking for the United States Court of Appeals, before she became an Assistant U.S. District Attorney in Michigan. Granholm successfully ran for Attorney General of Michigan in 1998, and then even went on to become the state’s first female governor in 2003. Granholm served in this position until her term limit expired, in 2011; she was a highly popular governor for the state, guiding Michigan through the recession and economic crisis of 2008, which hit the state’s automotive industry very hard.

Jennifer Graham published her first book – A Governor’s Story: The Fight for Jobs and America’s Future – in 2011, and the book led to an offer to host her own television show, The War Room with Jennifer Granholm, for Current TV. Today, Jennifer Granholm is seen frequently as a political commentator; she has been a vocal supporter of Hillary Clinton in the 2016 election.

For more information on booking Jennifer Granholm, please contact Booking Entertainment. One of our top booking agents will be happy to work on your behalf to get you the best possible price to book any big name entertainer for your upcoming public, private or corporate event worldwide.

Booking Entertainment works to get the best possible Jennifer Granholm booking fee and Jennifer Granholm price for our clients while also providing the celebrity or famous entertainer with the level of professionalism and industry norms that they expect from an event run by a professional booking agency and production management.

Booking Entertainment uses our agency / management relationships and over 25 years of production experience to help buyers of headline / top name entertainers and does not claim or represent itself as the exclusive Jennifer Granholm agent, manager or management company for any of the artists on our site.

Booking Entertainment does not claim or represent itself as the exclusive booking agency, business manager, publicist, speakers bureau or management for Jennifer Granholm or any artists or celebrities on this website.