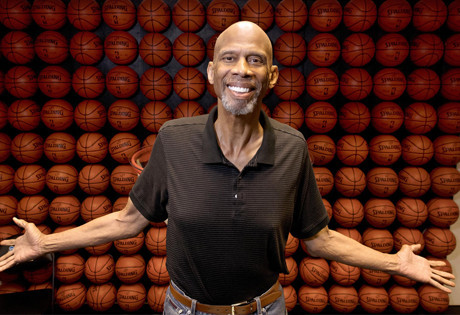 Start by filling out our no-obligation entertainment request form to check pricing and availability for Kareem Abdul Jabbar or whoever else you may want.

The American basketball player Kareem Abdul-Jabbar was born in 1947 in New York City. Kareem’s talents on the basketball court were evident from the time he was a young child, and by the time he reached high school he was a six-foot, eight-inch powerhouse on the team. After leading his high school team to a staggering seventy-one game winning streak and three championships, it was no surprise that Abdul-Jabbar was then offered an athletic scholarship to the University of California at Los Angeles.

After college, Kareem Abdul Jabbar played first for the Milwaukee Bucks and then the Los Angeles Lakers. His career as a professional player is as impressive as his college record, earning him six NBA Most Valuable player awards and nineteen NBA All-Stars, in addition to dozens of other accolades. By the time he retired in 1989, Jabbar had risen to the all-time leader in points scored for the NBA, in addition to leader for games played, field goals made, and defensive rebounds. In 1996, he was recognized as one of the 50 Greatest Players in NBA History.

While still playing for the LA Lakers, Kareem Abdul Jabbar launched a film career which began with his appearance in the 1980 comedy film Airplane! Additional roles include: Fletch, Forget Paris, and Troop Beverly Hills, in addition to roles on the television shows: Martin, Everybody Loves Raymond, Full House, The Fresh Prince of Bel-Air, and Scrubs, to name a few. In addition to his career in film, Kareem has authored multiple books, beginning with his autobiography Giant Steps, released in 1983. Addition publications include: A Season on the Reservation: My Sojourn with the White Mountain Apaches; On the Shoulders of Giants: My Journey Through the Harlem Renaissance; and What Color Is My World? The Lost History of African American Inventors.

A frequent commentator on social and political issues, Kareem Abdul Jabbar has also contributed to columns in Time Magazine and has appeared on multiple television talk show segments, such as Meet the Press.

For more information on booking Kareem Abdul Jabbar, please contact Booking Entertainment. One of our top booking agents will be happy to work on your behalf to get you the best possible price to book any big name entertainer for your upcoming public, private or corporate event worldwide.

Booking Entertainment works to get the best possible Kareem Abdul Jabbar booking fee and Kareem Abdul Jabbar price for our clients while also providing the celebrity or famous entertainer with the level of professionalism and industry norms that they expect from an event run by a professional booking agency and production management.

Booking Entertainment uses our agency / management relationships and over 25 years of production experience to help buyers of headline / top name entertainers and does not claim or represent itself as the exclusive Kareem Abdul Jabbar agent, manager or management company for any of the artists on our site.

Booking Entertainment does not claim or represent itself as the exclusive booking agency, business manager, publicist, speakers bureau or management for Kareem Abdul Jabbar or any artists or celebrities on this website.