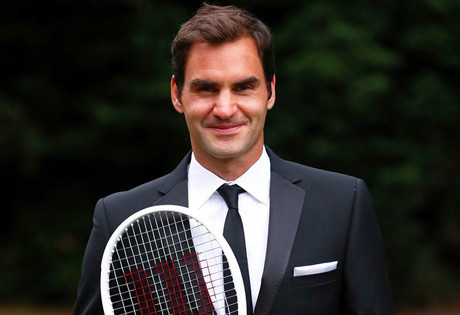 Start by filling out our no-obligation entertainment request form to check pricing and availability for Roger Federer or whoever else you may want.

Our Roger Federer agent will be happy to help you get Roger Federer's availability and booking fee, or the price and availability for any other A-List entertainer, band, comedian or celebrity you may want for your corporate event, private party, wedding, birthday party or public show.

Top ranking tennis player Roger Federer was born in 1981 in Basel, Switzerland. Long before Federer rose to becoming one of the world’s most accomplished competitors in the sport, he grew up training from a very young age. By the time he was seventeen, he’d won both the boys’ singles and doubles at Wimbledon, bringing him to the number one spot in junior world ranking.

Shortly thereafter, Roger Federer turned professional in 1998, and since that time he has risen to become one of the world’s most formidable competitors. By 2002, he had defeated Pete Sampras at Wimbledon, won the Hamburg Masters, and made his first Grand Slam quarterfinal at the French Open. His first singles title at Wimbledon came in the following year, and since that time Federer’s record reflects one staggering achievement after another: winning seventeen Grand Slam singles titles; reaching the Wimbledon final seven times; reaching twenty-seven Grand Slam finals; winning a record six ATP World Tour Finals; and having earned more money in winning prices than any other player in history thus far. Ranking among the highest paid athletes in the world, Roger Federer enjoys endorsement deals with such high-profile companies as Nike, Rolex. Mercedes-Benz, and Credit Suisse.

Roger Federer established his own foundation in 2003, with the goal of providing support for under-privileged children and to further access to sports and education. UNICEF appointed Federer as a Goodwill Ambassador in 2006, and his own organization has helped victims of Hurricane Katrina, the Indian Ocean earthquake, and the Haitian earthquake of 2010.

Currently, Roger Federer ranks as the number two tennis player in the world, according to the Association of Tennis Professionals.

For more information on booking Roger Federer, please contact Booking Entertainment. One of our top booking agents will be happy to work on your behalf to get you the best possible price to book any big name entertainer for your upcoming public, private or corporate event worldwide.

Booking Entertainment works to get the best possible Roger Federer booking fee and Roger Federer price for our clients while also providing the celebrity or famous entertainer with the level of professionalism and industry norms that they expect from an event run by a professional booking agency and production management.

Booking Entertainment uses our agency / management relationships and over 25 years of production experience to help buyers of headline / top name entertainers and does not claim or represent itself as the exclusive Roger Federer agent, manager or management company for any of the artists on our site.

Booking Entertainment does not claim or represent itself as the exclusive booking agency, business manager, publicist, speakers bureau or management for Roger Federer or any artists or celebrities on this website.