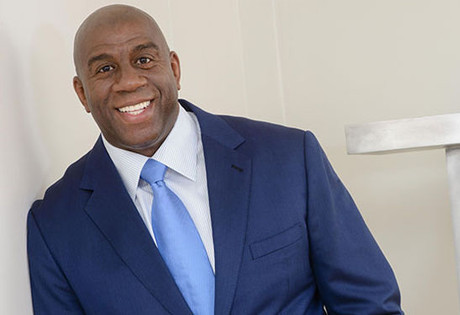 Start by filling out our no-obligation entertainment request form to check pricing and availability for Magic Johnson or whoever else you may want.

Our Magic Johnson agent will be happy to help you get Magic Johnson's availability and booking fee, or the price and availability for any other A-List entertainer, band, comedian or celebrity you may want for your corporate event, private party, wedding, birthday party or public show.

The American professional basketball player Earvin “Magic” Johnson Jr. was born in 1959 in Lansing, Michigan. Johnson grew up in a family big on a strong work ethic – his father worked in the automotive industry and his mother as a custodian in one of the local schools. As a child, Earvin became enamored with basketball, and by the time he was in high school, he’d earned the nickname “Magic” for his talents on the court.

Magic Johnson left high school as one of the best high school basketball players in the state. He then attended Michigan State, but while he played basketball for the university, he at the time had his professional sights on a future in sports commentary. But after majoring in Communication Studies, Johnson ultimately accepted an offer to play for the Los Angeles Lakers in 1979. Johnson went on to play point guard for the Lakers for thirteen seasons. But it was a shocking revelation in the early 1990’s which ended his career as a basketball player and launched a different kind of career for him.

Magic Johnson’s revelation that he was HIV positive in 1991 came at a time when the disease was little understood and much feared. Although he would go on to play in the 1992 United States men’s Olympic basketball team, earning a gold medal, and playing a number of exhibition games, from the mid 1990’s onward Magic stayed largely off the court.

Instead, Magic Johnson became one of the era’s most respected and recognizable advocates for HIV/AIDS prevention and education. Today Johnson is considered by many to be among the world’s most influential black entrepreneurs, philanthropists, and speakers. Since the late 1990’s, Johnson has hosted his own late night talk show, launched his own record label, and alongside other investors purchased the Los Angeles Sparks and the Los Angeles Dodgers. He has also authored three books, one of whish is his autobiography, titled simply: Magic Johnson: My Life.

For more information on booking Magic Johnson, please contact Booking Entertainment. One of our top booking agents will be happy to work on your behalf to get you the best possible price to book any big name entertainer for your upcoming public, private or corporate event worldwide.

Booking Entertainment works to get the best possible Magic Johnson booking fee and Magic Johnson price for our clients while also providing the celebrity or famous entertainer with the level of professionalism and industry norms that they expect from an event run by a professional booking agency and production management.

Booking Entertainment uses our agency / management relationships and over 25 years of production experience to help buyers of headline / top name entertainers and does not claim or represent itself as the exclusive Magic Johnson agent, manager or management company for any of the artists on our site.

Booking Entertainment does not claim or represent itself as the exclusive booking agency, business manager, publicist, speakers bureau or management for Magic Johnson or any artists or celebrities on this website.