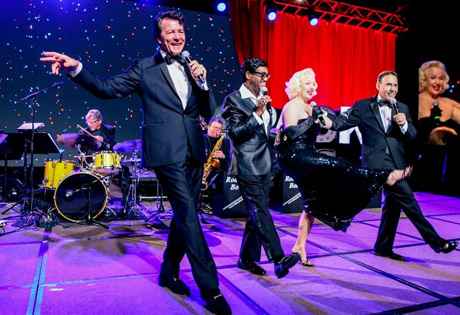 All the favorites, including songs like Frank Sinatra’s “Come Fly With Me,” “Fly Me To The Moon,” “I’ve Got The World On A String”. There’s Dean Martin’s “Everybody Loves Somebody,” “That’s Amore,” and “Volare,” among others.   Completing this musical tribute are Sammy Davis, Jr., songs like “The Candy Man,” “I’ve Gotta Be Me,” and the classic “Mr. Bojangles

A Tribute to the most iconic performers of the 50s & 60s

Start by filling out our no-obligation entertainment request form to check pricing and availability for the Rat Pack.

Want to talk about your event now? Give us a call at (212) 645-0555, or email Chey Reynolds at chey@bookingentertainment.com. Chey will be happy to help you immediately.

All the favorites, including songs like Frank Sinatra’s “Come Fly With Me,” “Fly Me To The Moon,” “I’ve Got The World On A String”. There’s Dean Martin’s “Everybody Loves Somebody,” “That’s Amore,” and “Volare,” among others.   Completing this musical tribute are Sammy Davis, Jr., songs like “The Candy Man,” “I’ve Gotta Be Me,” and the classic “Mr. Bojangles

Our The Rat Pack agent will be happy to help you get The Rat Pack's availability and booking fee, or the price and availability for any other A-List entertainer, band, comedian or celebrity you may want for your corporate event, private party, wedding, birthday party or public show.

Wondering how to book the Rat Pack for your event?

The Sands Hotel in Las Vegas was the scene of a major entertainment event, as Frank Sinatra, Dean Martin, and Sammy Davis, Jr., took the stage each night during much of the 1960s. And now, their show is re-created in a most authentic way in this Rat Pack Tribute, performed by the most sought-after impersonators in the industry today. It’s a trip back to the exciting atmosphere of Rat Pack-era Las Vegas, with music, comedy, and the camaraderie of three legendary friends who made history on the stage of the Copa showroom, and includes Susan Griffiths, the top Marilyn Monroe impersonator in the world. Enjoy that famous brotherly relationship with these talented impersonators as they engage in some playful duets and lots of laughs — planned and spontaneous — all waiting to unfold on your stage tonight. Extraordinary vocals, backed by a small orchestra. This is Gala fundraising entertainment at its best. Your supporters will love the theme, too. Show includes a lot of audience enagement. The pack performance can include all four impersonators, or can be booked as individuals.

Susan Griffiths (Marilyn Monroe) Cloney Award winner for Most Outstanding Impersonation of a Female Film Legend. Susan Griffiths is a TV actress and Marilyn Monroe look-alike who appears as the l’m legend in the Season Five episode of Quantum Leap titled “Goodbye Norma Jean”. She starred in Marilyn and Me, and portrayed Ms. Monroe in Pulp Fiction & on Curb Your Enthusiasm.

Monty Aide (Frank Sinatra) Portraying Frank Sinatra and leading the group is Monty Aidem. His fabulous singing voice and likeness to Sinatra is astounding. If you shut your eyes, you’d think it was Ol’ Blue Eyes himself. Monty also wrote for stars including Bob Hope, John Wayne, and Dean Martin on various TV specials, including The Dean Martin Roasts. He became a star writer for Johnny Carson on The Tonight Show. Later, he was Vicki Lawrence’s writer on her Emmy-nominated daytime talk show.

Lambus Dean (Sammy Davis, Jr.) Portraying Sammy Davis, Jr., is Lambus Dean. (Yes, that’s his last name!) Lambus has appeared in countless Rat Pack tribute shows across America, and abroad. Lambus’ recreation of Sammy is so powerful, he starred in a live Las Vegas production of Golden Boy, playing the same role Sammy played on Broadway. Dean is also the star of a Las Vegas stage show called The Sammy Davis, Jr., Story that will ultimately tour the U.S., which is further confirmation that if you want Sammy, you want Lambus.

Andy DiMino (Dean Martin) Portraying Dean Martin is Andy DiMino, who starred in Las Vegas’ permanent show, Rat Pack Tribute, performing both in Las Vegas and on the road, consistently receiving the best reviews of all the performers for his effortless way of capturing Dean’s irreplaceable charm. Andy has portrayed Dean on various TV productions, print ads, and appeared as a special guest in country music star Martina McBride’s show. In demand all over the world, Andy is one of the only American performers to be featured in Stars In Concert, Europe’s premier tribute production.

For more information on booking The Rat Pack, please contact Booking Entertainment. One of our top booking agents will be happy to work on your behalf to get you the best possible price to book any big name entertainer for your upcoming public, private or corporate event worldwide.

Booking Entertainment works to get the best possible The Rat Pack booking fee and The Rat Pack price for our clients while also providing the celebrity or famous entertainer with the level of professionalism and industry norms that they expect from an event run by a professional booking agency and production management.

Booking Entertainment uses our agency / management relationships and over 25 years of production experience to help buyers of headline / top name entertainers and does not claim or represent itself as the exclusive The Rat Pack agent, manager or management company for any of the artists on our site.

Booking Entertainment does not claim or represent itself as the exclusive booking agency, business manager, publicist, speakers bureau or management for The Rat Pack or any artists or celebrities on this website.