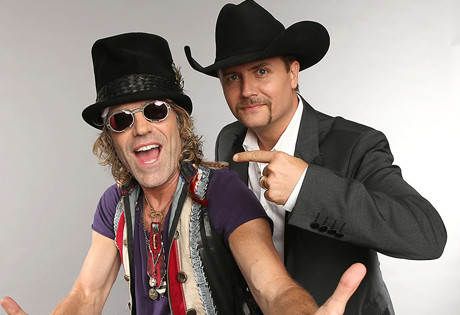 Start by filling out our no-obligation entertainment request form to check pricing and availability for Big & Rich or whoever else you may want.

Our Big & Rich agent will be happy to help you get Big & Rich's availability and booking fee, or the price and availability for any other A-List entertainer, band, comedian or celebrity you may want for your corporate event, private party, wedding, birthday party or public show.

Big & Rich was established in 2004 when John Rich formerly of the band ( Lonestar) and Big Kenny came together to form the country music duo. They began writing songs together, and even contributed tracks for McBride & the Ride (“Amarillo Sky”) and Martine McBride (“She’s a Butterfly.”) It was after their success together as songwriters that their managers began suggesting that the two form a musical duo, and so they began recording together. Warner Bros. Records immediately saw the potential in their performing talents, and signed Big & Rich in 2003.

Big & Rich’s debut album, Horse of a Different Color, was released in 2004 and went on to become a smash country hit. The album spawned the singles “Save a Horse (Ride a Cowboy),” “8th of November,” and “Lost in this Moment.” Before moving on to their sophomore effort together, both Big and Rich released solo albums (Son of a Preacher Man by Rich, and The Quiet Times of a Rock and Roll Farm Boy by Big Kenny), but returned with Comin’ to Your City in 2005. The album Between Raising Hell and Amazing Grace followed in 2007.

In addition to their own albums, which often feature contributions from other artists (including John Legend, Lil Jon, and Wyclef Jean), Big & Rich has lent their songwriting and vocal talents to artists such as Cowboy Troy, Gretchen Wilson, Wynonna Judd, Tim McGraw, James Otto, Jon Bon Jovi, and Keith Anderson. Big & Rich also covered John Lennon’s “Nobody Told Me” for the album Instant Karma: The Amnesty International Campaign to Save Darfur in 2007.

Big & Rich continue to write, perform, record, and tour. Their most recent release, Hillbilly Jedi (2012), has proven highly successful, resulting in CMA and ACM nominations for Big & Rich, for Top Vocal Duo in 2012 and 2013.

For more information on booking Big & Rich, please contact Booking Entertainment. One of our top booking agents will be happy to work on your behalf to get you the best possible price to book any big name entertainer for your upcoming public, private or corporate event worldwide.

Booking Entertainment works to get the best possible Big & Rich booking fee and Big & Rich price for our clients while also providing the celebrity or famous entertainer with the level of professionalism and industry norms that they expect from an event run by a professional booking agency and production management.

Booking Entertainment uses our agency / management relationships and over 25 years of production experience to help buyers of headline / top name entertainers and does not claim or represent itself as the exclusive Big & Rich agent, manager or management company for any of the artists on our site.

Booking Entertainment does not claim or represent itself as the exclusive booking agency, business manager, publicist, speakers bureau or management for Big & Rich or any artists or celebrities on this website.