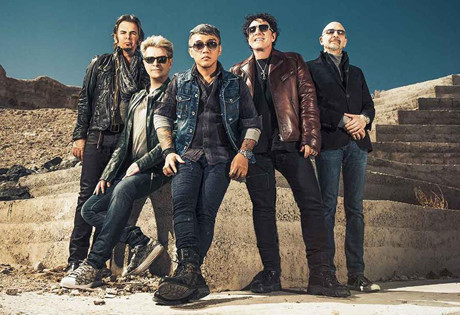 Start by filling out our no-obligation entertainment request form to check pricing and availability for Journey or whoever else you may want.

Our Journey agent will be happy to help you get Journey's availability and booking fee, or the price and availability for any other A-List entertainer, band, comedian or celebrity you may want for your corporate event, private party, wedding, birthday party or public show.

Founded by Santana guitarist Neil Schon, bassist Ross Valory, keyboardist Gregg Rolie, and drummer Prairie Prince, Journey burst onto the San Francisco scene in the 1970’s. The group’s self-titled album was released in 1975, and in 1977 Journey hired Steve Perry as vocalist and front man. His unique voice would become iconic for the band for decades.

Journey released a series of highly successful albums in the 70’s and 80’s, including Infinity (1978), which went platinum, Evolution (1979), Departure (1980), and Captured (1981), before their massive hit Escape was released, featured the Top Ten singles "Who's Crying Now," "Don't Stop Believin'," and "Open Arms." Journey’s Escape went platinum nine times, and was followed by Frontiers, which featured "Separate Ways," in 1983.?? After a brief hiatus, Raised on Radio was released in 1986, and Journey went into a longer hiatus until the early 1990’s. Eventually, For the Love of Strange Medicine in 1994 was released, followed by? Trial by Fire in 1996.

Today, in the new millennium, Journey continues to perform and record even though Steve Perry left the group at the turn of the new millennium. In the summer of 2007, the group began searching for a new lead singer, eventually hiring Arnel Pineda, a Filipino singer they discovered performing covers of Journeys hits on YouTube. Pineda’s voice, remarkably similar to Perry’s, helped launch their next album, Revelation, to a number five debut, and their 2008 tour was one of the highest grossing concerts of that year. The band's second album with Pineda, Eclipse, was released on May 24, 2011, and later that year, Journey released Journey: Greatest Hits: Volume 2.

Today Journey continues to delight fans around the globe. In 2012 the Tribeca Film Festival premiered Don't Stop Believin': Everyman's Journey, a documentary directed by Ramona A. Diaz. The film documents Journey’s discovery of Arnel Pineda, and follows the band on the road for one year. Journey was recently inducted into the Rock and Roll Hall of Fame in 2017; that same year, the group embarked on an extensive nationwide tour.

For more information on booking Journey, please contact Booking Entertainment. One of our top booking agents will be happy to work on your behalf to get you the best possible price to book any big name entertainer for your upcoming public, private or corporate event worldwide.

Booking Entertainment works to get the best possible Journey booking fee and Journey price for our clients while also providing the celebrity or famous entertainer with the level of professionalism and industry norms that they expect from an event run by a professional booking agency and production management.

Booking Entertainment uses our agency / management relationships and over 25 years of production experience to help buyers of headline / top name entertainers and does not claim or represent itself as the exclusive Journey agent, manager or management company for any of the artists on our site.

Booking Entertainment does not claim or represent itself as the exclusive booking agency, business manager, publicist, speakers bureau or management for Journey or any artists or celebrities on this website.