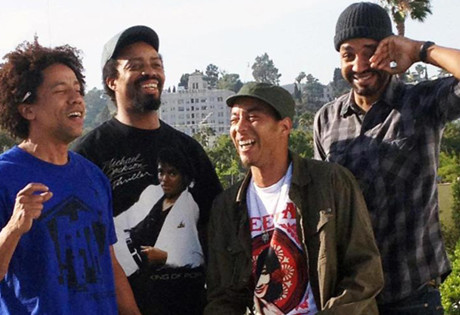 Start by filling out our no-obligation entertainment request form to check pricing and availability for Pharcyde or whoever else you may want.

Our Pharcyde agent will be happy to help you get Pharcyde's availability and booking fee, or the price and availability for any other A-List entertainer, band, comedian or celebrity you may want for your corporate event, private party, wedding, birthday party or public show.

The hip hop group known as The Pharcyde was established in South Central Los Angeles in the early 1990’s, by founding members Derrick Stewart (Fatlip), Romye Robinson (Bootie Brown), Trevant Hardson (Slimkid3), and Emandu Wilcox (Imani.) Three of the group’s members had been working as dancers in the 1980’s, and after deciding to form their own group, The Pharcyde released a debut demo in 1991.

The demo featured the songs “Officer” and “Ya Mama” in addition to the song “Passin’ Me By,” which would go on to become their best known hit. Representatives from Delicious Vinyl were impressed with the demo and signed The Pharcyde to the label in 1992, in time to record and release the debut album, Bizarre Ride II the Pharcyde. The album quickly earned praise for the group, and ultimately became one of the most successful and influential albums of the era, particularly in the alternative hip hop genre. The song “Passin’ Me By,” originally featured on The Pharcyde’s demo, was released and charted on Billboard’s Hot 100.

Since then, “Passin’ Me By” has gone on to become a classic hit, and The Pharcyde has since released the albums Labcabincalifornia (1995), Plain Rap (2000), and Humboldt Beginnings (2004.) The albums spawned the additional singles: “Running,” “Drop,” “She Said,” “Trust,” and “Knew U.” The Pharcyde continues to perform live, and has recently made appearances at a number of events, including a performance at the Roxy Theater for the group’s own twentieth anniversary celebration of their debut album.

Due to the success of that appearance, The Pharcyde launched a tour in 2012, and released a new single, “Still Got Love ( Bizarre Tribe Megamix.)”

For more information on booking Pharcyde, please contact Booking Entertainment. One of our top booking agents will be happy to work on your behalf to get you the best possible price to book any big name entertainer for your upcoming public, private or corporate event worldwide.

Booking Entertainment works to get the best possible Pharcyde booking fee and Pharcyde price for our clients while also providing the celebrity or famous entertainer with the level of professionalism and industry norms that they expect from an event run by a professional booking agency and production management.

Booking Entertainment uses our agency / management relationships and over 25 years of production experience to help buyers of headline / top name entertainers and does not claim or represent itself as the exclusive Pharcyde agent, manager or management company for any of the artists on our site.

Booking Entertainment does not claim or represent itself as the exclusive booking agency, business manager, publicist, speakers bureau or management for Pharcyde or any artists or celebrities on this website.