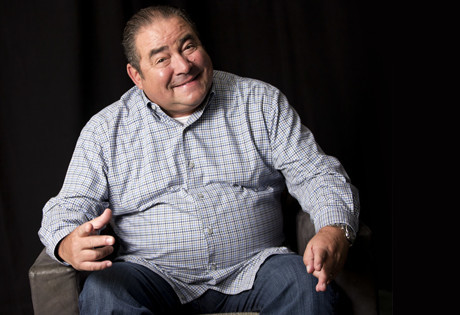 Start by filling out our no-obligation entertainment request form to check pricing and availability for Emeril Lagasse or whoever else you may want.

Our Emeril Lagasse agent will be happy to help you get Emeril Lagasse's availability and booking fee, or the price and availability for any other A-List entertainer, band, comedian or celebrity you may want for your corporate event, private party, wedding, birthday party or public show.

World famous chef Emeril Lagasse was born in 1959 in Massachusetts. Long before Emeril rose to become one of the era’s most noted experts on Creole and Cajun cuisine, he grew up the Fall River area, learning to cook while working as a teenager in a Portuguese bakery. Emeril initially harbored aspirations to become a musician; he was a talented percussionist who was offered a scholarship to attend the prestigious New England Conservatory of Music. But his lifelong love of cuisine led to his decision to attend Johnson & Wales University instead.

After graduating from the institute, Lagasse wen to work as executive chef at the Dunfey’s Hyannis Resort. Within four years, he’d earned numerous accolades, including a Chef of the Year award in 1983. A few years later he then became executive chef at Commander’s Palace in New Orleans; the job became his big breakthrough and shaped his love of Creole and Cajun cuisine. By the early 1990’s, Emeril had opened his eponymous restaurant in New Orleans, and the rest, as they say, is history.

Emeril’s quickly became world renowned and Lagasse’s talents began to garner attention from networks. His earliest television appearances in the mid 1990’s were on the show Great Chefs, which led to The Essence of Emeril. The show Emeril Live began its run in 1997, earning Lagasse a Cable Ace Award, and leading to appearances on Good Morning America as the network’s food correspondent. Other notable appearances from Emeril include: From Emeril’s Kitchen (Shop at Home Network, 2005-2006); Top Chef (as a judge, 2009); The Emeril Lagasse Show (Ion Television, 2010); and Emeril’s Florida (for the Cooking Channel, 2013-2016.)

Today, Emeril Lagasse is both proprietor and executive chef for twelve restaurants in not only New Orleans, but also Pennsylvania, North Carolina, Orlando, and Las Vegas. Emeril also has a number of branded cooking products, including ingredients (sauces, spices, and marinades), kitchen knives, electrical cookware, appliances, and cookbooks. Emeril Lagasse also oversees his own foundation, established in 2002 to support educational initiatives for children and children’s charities. Lagasse has been recognized with a James Beard Foundation Humanitarian of the Year Award for his contributions.

Today, Emeril Lagasse continues to be one of the era’s most recognizable chefs and brands. He can currently be seen hosting the Amazon series Eat the World with Emeril Lagasse, which aired in 2016 and is available for streaming.

For more information on booking Emeril Lagasse, please contact Booking Entertainment. One of our top booking agents will be happy to work on your behalf to get you the best possible price to book any big name entertainer for your upcoming public, private or corporate event worldwide.

Booking Entertainment works to get the best possible Emeril Lagasse booking fee and Emeril Lagasse price for our clients while also providing the celebrity or famous entertainer with the level of professionalism and industry norms that they expect from an event run by a professional booking agency and production management.

Booking Entertainment uses our agency / management relationships and over 25 years of production experience to help buyers of headline / top name entertainers and does not claim or represent itself as the exclusive Emeril Lagasse agent, manager or management company for any of the artists on our site.

Booking Entertainment does not claim or represent itself as the exclusive booking agency, business manager, publicist, speakers bureau or management for Emeril Lagasse or any artists or celebrities on this website.